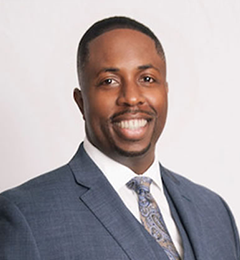 Joey M. McCall, Esq., MBA is the Managing Partner of McCall | Elizee, Attorneys at Law. McCall | Elizee, Attorneys at Law provides legal representation in the following areas of law: outside general counsel services, business brokerage, and pro-bono civil rights and human trafficking related representation. In his spare time Mr. McCall fulfills his civic duty serving as an appointed member of the City of Miami Civilian Investigative Panel and as Chairman of the Panel’s Complaints Committee. Mr. McCall also volunteers his time, sitting on the boards of a number of philanthropic causes and charities. Mr. McCall has been repeatedly recognized as a SUPER LAWYERS Rising Star. He is one of the National Trial Lawyers Association’s “Top 100 Trial Lawyers,” and he holds the distinction of having been recognized as one of the National Black Lawyers Association’s “Top 40 under 40.” Most recently, Mr. McCall was inducted as an Associate Fellow of the Litigation Counsel of America: The Trial Lawyer Honorary Society (“LCA”). Mr. McCall has also received the designation of “Martindale Hubbell Preeminent”, which is a rating that is based upon peer review and only awarded to attorneys with the highest ethical standards, skills, and reputation. Mr. McCall advocates for the voiceless and disenfranchised no matter what situation or walk of life they are in, and he seeks to drive change in a diverse variety of industries and communities.

Mr. McCall is admitted to practice law in the following state court and federal court jurisdictions:

Mr. McCall was the President of the St. Thomas University Law School Trial Team where he led the team to victories at both the Chester H. Bedell Trial Advocacy Competition hosted by the Florida Trial Lawyers Section of the Florida Bar (11′) and the ABA John Marshall Law School National Criminal Justice Trial Competition (11′).  He was awarded the distinction “Best Advocate” at the Chester H. Bedell Trial Advocacy Competition, an honor that only one law student may receive per year.  Mr. McCall graduated with his Juris Doctorate Degree in May 2011. Mr. McCall also received his MBA with Distinction from DePaul University.